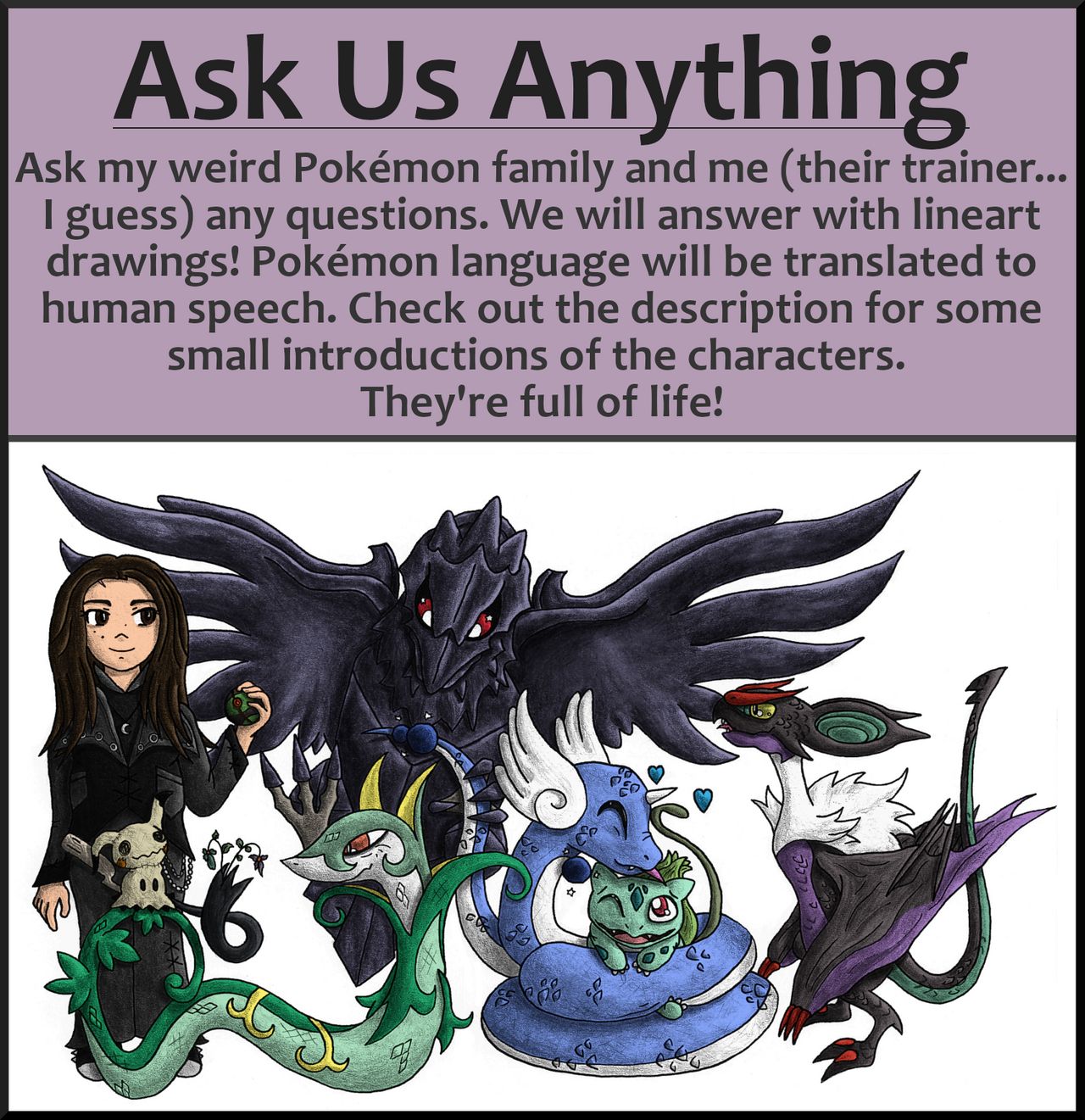 ***************** Me, the trainer of that crazy bunch *****************
Hi! My name is Gwenda and I was born in the bustling Nimbasa City. "Bustling" actually means "ugly and overcrowded" here, so I'm absolutely glad that I moved to the much more pristine White Forest village after I finished school. Here, my Pokémon team and me share a small wooden cottage under a majestic tree's crown. That may sound like a quiet and boring life to you... it's not. It's literally like sharing your apartment with a whole kindergarten with magic powers. On top of that, we work as semi-professional Pokémon hunters which can get pretty wild too, especially when you're as chaotic as I am. Assisted by my team, I capture the creatures of my vast forest homeland and sell them to responsible novice trainers. My biggest passion - next to drawing and being creative in general - sure is strategic battling though. The nearby Nimbasa Battle Subway always hosts a lot of tournaments and stuff, and then there's also all the diverse travelling trainers I can battle in my own home village - they visit the forest because of our infamous Treehollow Challenge. I never felt like going on an actual trainer journey myself, I probably wouldn't even enjoy it. But I did travel to some faraway places to catch the exact six Pokémon I always wanted to befriend (I can get ridiculously obsessed about such things). Well, I succeeded and now they're basically my multi species family. While I admittedly like to talk about myself, I'd rather start with introducing them to you. You can always ask me questions later anyway.

***************** Styx the Mimikyu *****************
A shy shadow creature who's quite silent but bubbly in his own way. Mostly a sweet little thing, Styx can be surprisingly dark and macabre too. Despite his rather timid personality, he has enough ambition to outgrow himself time and time again. He's creative, so he loves to sew and wear a variety of different costumes - it would bore him to always hide in the same old Pikachu rag. I often buy fabrics for him to meet his needs. It isn't neccessary for his species to eat. Styx doesn't care about this fact as soon as he sees chocolate and candy.

***************** Ophelia the Serperior *****************
She lived in the wild for many years and has the wisdom of old age. Usually, she shows a proud and distanced serenity, not only in battle. That doesn't mean she can't be caring - in fact, she loves all of the team dearly like a grandmother. She would protect them with the fierce strenght of an apex predator. Speaking of that, her favourite prey are water Pokémon. She hunts her own food in the vast nature surrounding our town. Ophelia is a very well-mannered snake who treats friends and foes with ladylike politeness.

***************** Nova the Corviknight *****************
She behaves like a true knightess towards her trainer. Nova relishes in serving me loyally and proving her strength to me. My praise means a lot to her. Whenever she defeats an enemy, she proclaims her victory loudly and full of triumph. Outside of battle she's a way more relaxed and playful bird, in a self-confident but not arrogant way (though she does have an annoying habit of scolding the other team members if they disobey me). Nova enthusiastically collects all sorts of shiny items.

***************** Atlantis the Dragonair *****************
She's as gleeful as she's naive. The sea and the skies are the dragoness' playground; even in battle she is playful. Because she can't always estimate her own power, she may appear a bit clumsy. Her childlike and rash behaviour can be stressful to handle, but it's impossible for me to be angry with her for long. Atlantis shows great sensitivity to the feelings of other living beings. She is affectionate and always ready to help. Unlike my other dragon Nyctal, she's large and strong enough to carry a person through the air over a long distance... in theory. I still prefer to ride Nova most of the time, since Atlantis' flight style feels like a turbulent rollercoaster ride.

***************** Faunus the Bulbasaur *****************
He is a vain little diva and enjoys care and attention more than anything else. That being said, Faunus is kindhearted and tender and likes to care for others too. He fosters the plant on his back with great diligence. It's not just about kindness, though, but also about looks - after all, the bulb is like a permanent living accessory and should better look fabulous. Faunus is calm and collected and remarkably elegant for a poisonous frog on stubby legs. He does not want to evolve as he likes it way too much to be agile and adorable.

***************** Nyctal the Noivern *****************
He is bold, cheeky and quick as the wind! While he sleeps through most of the day, he's all the more energetic and mischievous when he wakes in the dark. Nyctal is quite the battlesome dragon and dives into every fight with bravery - his trust in his own power and abilities borders on arrogance. He's also a most curious little explorer and finds exitement in investigating new things. When the rest of the team goes to sleep, he has just begun to roam the wide night skies. For this reason I've had a glass Pokéball installed to the inner side of my window. It functions like a cat door for Pokémon - Nyctal can press the capsule's button from outside to come back home from his adventures anytime. Every morning he slumbers in his glassy ball again, sated by the prey he hunted at night.